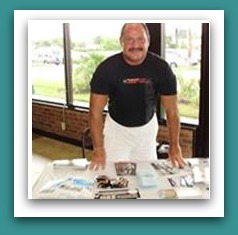 Tony V. Iaquinto was born in Jacksonville Florida in 1956 just north of the Fountain of Youth where his fascination with health and wellness became a life journey. Tony was blessed with Christian parents who recognized this interest with all aspect of exercising and how it benefited his health. In the late 1960’s he was on a swim team and his parent’s continued promoting his interest in all forms of exercise through his youth.

In late 1970’s after being a multi-sport athlete in high school he expanded his interest in fitness and wellness and became fully immersed into strength and cardio training to enhance his personal health and fitness programs. His first job working in a health club was part time at a Jack Lalanne Health Spa as this was his first exposure to organized strength training using newly developed Nautilus exercise equipment.

In 1981 Tony was employed full time at the exclusive Palm Aire Spa in Pompano Beach, FL . The spa guests would enjoy a variety of service including steam room, dry sauna, whir pools, hot and cold plunge, herbal wraps, Swiss shower, and private heated swimming pool. This job required him to assign all spa guests all of their various hydration, relaxation and fitness methods daily. Additionally Tony trained spa guests that were specifically assigned to the spa director. The guest included Hollywood celebrities, royalty, presidents of fortune 500 companies and other unique business professionals.

In March of 1983, he was selected to be on the team that opened the Las Colinas Sport Club in Irving, TX , which is currently called the Four Sessions Resort and Club as manager of the day to day management functions related to the guest services and scheduling. Tony’s desire to be part of opening the largest state of the art health and fitness facility continued to enhance his knowledge and skills within this industry. The Las Colinas Sport Club was four stories featuring 272,000 square feet, which was the most luxurious fitness facility ever seen at that time. The club featured two restaurants, two pro shops, a half mile indoor track, basketball court, racquet ball court, sports medicine facility, indoor heated Olympic swimming pool, private men and women locker rooms featuring the first chrome plated nautilus equipment, state of the art fitness training room, outdoor heated swimming pool, tennis courts, and Robert Trent Jones designed golf course, which hosted the 1983 Byron Nelson Golf Classic. By working at this facility, this allowed him to learn how such a club was managed and staffed so he could at some point later in his life open and operate his own version of this type of sports club.

After the successful launch of Las Colinas Sport Club, Tony returned to the Palm Aire Spa to be closer to his family and his state of birth. Tony duties included the day to day operation of the personal training department. In March of 1984, Tony was requisitioned to work exclusively with an Arab Crown Prince a guest of the Palm Aire Spa . Tony was in charge of 24/7 management of his security, personal training, nutrition, and entertainment. In six months, he lost 100 lbs. using his newly development protocols for fitness and nutrition. Once Tony’s service contract was up he rewarded him handsomely. This provided Tony the resources to create a fitness consulting firm called Personal Fitness, Inc. Services included fitness training and testing. In addition, Tony provided fitness consulting services to professional sports teams, law enforcement training academies, health clubs, and the 1984 Olympic Swim and Dive Teams. From 1986 to 1987 his company was co-owner of Apollo Gym Inc. in Hollywood Fl . He was able to learn more about the body building industry as this gym was the Mecca for power lifters as well as body builders in South Florida.

His company Personal Fitness, Inc. was also the manufacture representative for RJL System for their Body Composition Electrical Impedance Equipment for Florida. This was the introduction of the most advanced technology for measuring human hydration and body fat. This allowed Tony to be involved with all of the pro/college teams as well as all health clubs, sports medicine doctors, and other health professionals. Additionally the company marketed a body fat testing services throughout all of Florida to health clubs and doctors’ offices. Thousands of people were provided the services of body fat tests with mobile fitness testing service as a result of using the RJL BIA testing\equipment. His company Personal Fitness, Inc. operated until 1993.

From 1997 until 1999 he worked at Spa Fitness and Super Fitness as a fitness director and/or head of personal training.

In March of 1999, Tony founded Commit to be Fit, Inc., which has since become the premier fitness consulting firm in Jacksonville, FL . The goals of his company are to educate, motivate, and demonstrate the need for physical fitness, proper nutrition and hydration to everyone in our community! Services included body fat testing, personal training, corporate wellness, dietary supplement counseling, and sports nutritional counseling. He is also a consultant to the fitness and health food industry. He purchased the Body Comp Scale to use for his newly developed Commit To Be Fit For Life Program . Additionally the company re-emerged into the body fat testing services which with Tony’s experience in his first company.

From 2002-2003 his company Commit to be Fit Inc. was the official weight management consultant for Rock 105’s “Lex and Terry” Fatvivor Contest. Five contestants use his customized fitness and weight management programs to lose an amazing 100 lbs. in the first 12 days of the contest. Then they went home to continue to follow the program until they were brought back a year later to the final round and they lost an additional 250 lbs . They received a $100.00 for every pound lost and the first round winner won a $5000.00 hot tub and the second round winner won a cash prize of $5000.00!

From 2000 until 2006 he served on the Mayors Council on Fitness and Well-being . He was appointed by two administrations to serve by representing the Fitness community for the city of Jacksonville Fl . During his appointment he was selected to be the Expo Chairman for the Bank of America Bike Jacksonville 2003 event. As this was the first fitness event the city ever sponsored. Also, he was asked to be a Resource Volunteer to the Jacksonville City Council Education Task Force 2002-2003 . This involved him researching how health and wellness affected children’s performance in school.

From 2000 until 2005 he served on The Duval County Health Department Coalition on Childhood Obesity Committee. This was a volunteer appointment to be involved in promoting Childhood Obesity prevention in the North Florida community.

From 2002 thru 2004 the company became the manufactures representative for Penta Water for North Florida. They created at the time the most advanced pure micro-clustered bottled water in the health food industry.

From 2008 thru 2009 the company became the marketing agent for Vitargo S2 by GERr8 Inc. for North Florida. They currently have the most advanced carbohydrate sports nutrition product in the market today! The company acquired over 35 accounts to manage including all of the GNC’s stores in North Florida.

The healthy lifestyle counseling program offered by Tony Iaquinto is founded upon the principle of enhancing life through the proper education of fitness, nutrition, and hydration skills. Generally, there is nothing we value more, yet abuse more, than our physical health and well-being. We normally only concern ourselves with our healthwhen it is in jeopardy. It is a tragedy that we emphasize sickness rather than optimum health, that we are concerned with not dying rather than really living, and that we fail to accept the challenge of life's great potentials.

I am dedicated to helping you to live life to the fullest, to become a participant in life rather than spectator, and to maintain enthusiasm for each and every day. Educating, motivating and demonstrating the needs for physical fitness and proper nutrition will lead to a new and greater appreciation of what can be achieved in order to add life to one's years and remain healthy.

"It is my fondest wish that each person share the uncommon and intangible experience of living life at the highest possible level. It is my goal to design safe and efficient programs including all of the components of fitness; aerobic, strength training and flexibility with a sound nutritional and hydration program." Tony V. Iaquinto, President of Commit to be Fit, Inc.

In \2004 , he co-founded with his partner Susan Beauchamp a non-profit organization called Commit to be Fit-Kids Inc . the mission of the organization was to teach children on how to lead a healthy lifestyle! To date the program has successfully had over 2000
children complete this program here in the Duval County Public School System. This represents his and Susan’s commitment to see that the future health of children everywhere are better able to tackle the growing problem of obesity and the lack of physical education. This organization operated until May of 2010. Below are some of the organizations he has/have belonged to:

Currently, Tony has researched and developed a new hydration technology. This will culminate all of his investment into the fitness and nutrition industry of the past 35 years. The goal is to create the most effective way to hydrate everyone to improve their health ! www.drinkhydrasonicwater.com